A chaotic scene reminiscent of a kindergarten classroom clash. Hard-earned reputations tattered and thrown in the mud; distinguished lawmakers damn all the consequences there is and blatantly break laws in a house where laws are made.

Ursula Owusu-Ekuful, a female member of one side of the house is pushed off her seat by a male opponent. Hawa Koomson, a colleague, cringes, the beast in her is awakened! She roars!

Her facial expression communicates a simple yet wild message. Like a venomous snake, her mission is clearly defined – to without hesitation sting whoever dared touched her ‘beloved sister’ and perhaps earn the ‘defender of the defenseless’ accolade after grabbing ‘Rambo’ for giving gunshots at a registration centre in her constituency in the name of self-defense.

The resistance from her fellows, though not feeble, is unable to extinguish the fire inside her; her fury fans to flame, she stretches forth her hand with one finger, fiercely pointing to her target while her face juts with aggression.

Click! A photographer captures the priceless moment for documentation!

The scene in Ghana’s Parliament in the early hours of January 8, 2021, during the dissolution and commencement of the 7th and 8th Parliament respectively, of the 4th Republic, has become a meme – arguably, the most sought after when the subject matter is aggression.

It depicts a direct communication in which message-bearers project their capabilities, highlight the inabilities of their targets, and rub achievements on their faces simultaneously. It has also become useful in ‘I put it to you’ instances. 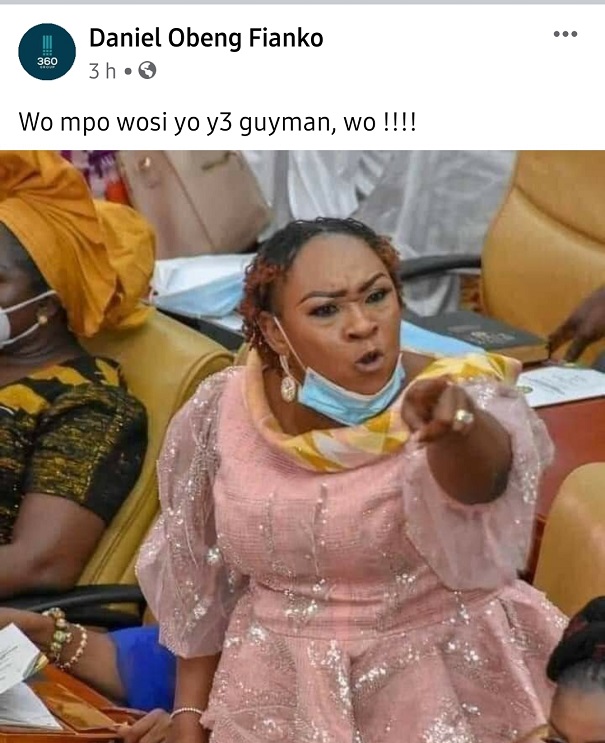